Warning: "continue" targeting switch is equivalent to "break". Did you mean to use "continue 2"? in W:\www\14179\iquip.co.za\wwwroot\wp-content\themes\Divi\includes\builder\functions.php on line 5810
 Fixtures for Tube Welding - iQuip Intelligent Equipment

Modular fixturing tables can increase your speed, productivity, and storage

For most people familiar with modular fixturing tables, the main benefit they are aware of is the ability to quickly place a clamp anywhere on the table. However, the real benefits go much deeper than that. Modular fixtures reduce cost and lead time during fixture design, create labor savings during production, and save storage space when not in use.

Modular fixtures can adapt to a wide variety of jobs while also making every result repeatable. They are an adaptable system that solve many work-holding problems for temporary jobs, prototyping, one-off items, and short production runs that are only occasionally performed. Most fabrication shops have jobs that require temporary clamping or fixturing every day, whether for a complex, three-dimensional workpiece or a simple length of material that requires grinding.

Modular fixturing is composed of reusable, off-the-shelf components so that the user does not have to fabricate individual fixture elements for every new job. A good modular system starts with a flat steel surface onto which is machined a grid pattern of regularly spaced system holes. System holes have a uniform thickness and diameter, often with chamfering, to better accept specially designed bolts.

Most modular systems are held together using special bolts that contain a collar on one end and ball bearings that can expand to lock components to the table or to each other. The bolts are designed to be tightened by manipulating only one end of the bolt, thus eliminating the inconvenience of reaching under a large table to fasten parts together with a traditional bolt and nut fastener.

Lastly, there are a variety of vertical and horizontal acting clamps that can interface not only with the system holes on the table for quick and versatile clamping, but can also be used with the holes on the modular fixtures. 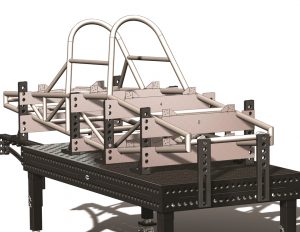 Modular fixturing makes the quotation process for smaller operations competitive by shrinking the amount of uncertainty involved with how much time and expense it will take to create fixtures (or complete a project without fixtures), ultimately making the quoted cost lower and more competitive.

Fabricators can also download CAD files of the modular fixtures to design everything on a computer. This is especially useful when creating some custom fixtures to interface with the modular components.

This hybrid strategy gives designers a lot of flexibility when designing fixtures and allows them to adjust and reuse parts in situations that previously would have required new fixtures or extra machining to adapt to changes in parts and design.

This means designers can design and create custom fixtures in hours or days rather than weeks with the traditional custom-machined fixtures.

Increased Productivity on the Shop Floor

Having good fixtures reduces operator error by ensuring parts are located correctly and clamped to prevent distortion of critical dimensions. Most welders know this but don’t practice it due to time constraints or shortage of workers with the skill set to create them. If you have an easy-to-use, modular system, you are more likely to create a fixture, and that system will pay off through less rework and scrap.

Modular fixtures are designed to be assembled and disassembled quickly. They take up much less space when stored than a dedicated fixture. Users who opt to create custom fixture plates or blocks for use with modular fixtures will still realize drastic space savings when compared to traditional fixtures.

Strong Hand Tools® donated materials to a design project that aimed to create a fixture for a solar car chassis to be used by a university in the American Solar Challenge. Tyler Smutz, Killstress Design, Anaheim, Calif., donated his skills to the project and designed the chassis and fixtures in CAD using modular fixture models available for download. The designer took advantage of the holes and right-angle brackets as reference points to design fixtures that mate with the system holes .

An interesting feature the designer added was to incorporate toggle clamp mounts into the design of the fixture plates. The slots and tabs are cut by a laser and later bent and tack welded by hand. This creates a setup suitable for even high production runs, although, in this case, we only created one final part.

This type of item can also be held exclusively with modular fixtures, although space constraints would have required it to be fit and welded in several sequences. The use of custom plates to hold the tubing simplifies setup and allows the entire part to be assembled and welded at once.

The fixtures themselves can have a compact footprint with a simplified feature set because they do not require as many adjustment features to be built into them. A fixture that must be 28 in. off the reference surface can be designed to sit on top of a 24-in. modular fixture instead of having to machine and store a 28-in.-tall fixture or split and redesign a 28-in. fixture into two 14-in.-long components to meet the envelope constraints of a machining center.

Modular fixturing systems play an expanding role in modern manufacturing operations and can bring improvements to numerous aspects of the fabrication process. The benefits of modular fixturing increase as the need for leaner, more flexible production grows.

This article first appeared on FABTECH, and reprinted with permission: The AWS Welding Journal